New game! I made it for Ludum Dare 28, though I ended up finishing five days late. The theme was "you only get one." The whole game is basically just an extended boss fight, and it takes less then five minutes to play through if you don't die. It is designed to take several attempts though, and if it's too hard or too easy you can adjust your starting health in the options menu. The music is Bach's Little Fugue in G Minor.

Download "Into the Vortex" here.
Posted by John Thyer at 6:55 PM 2 comments: 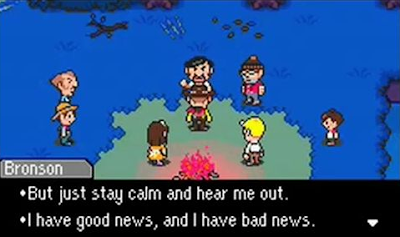 The most important scene in Mother 3 takes place around a fireplace. The scene is set up so that you can see all of the characters at once; the viewing angle is distant and constant. It feels like a stage play, but unlike in a play the characters aren't even real people − they're tiny, pixelated representations of real people. Imagine how different this scene would feel in a movie, where the camera could zoom in and around real life actors showing emotions on their real life faces. It'd be so much bigger, so much more immediate.

In Mother 3, there's an unbreachable distance between you and the characters. You can't make out their facial features, you can't hear what they're thinking, and some of them don't even speak. The characters who do speak say weird, eccentric things, and this is more evident around the fireplace then it is anywhere else. ("The good news is that I found you a new T-Rex fang that you can use as a weapon in battle. The bad news is...")

This wasn't an accident. Art is about storytelling and communication, and more than any other medium, games communicate through abstraction. No series understands that better than Mother.

The scene around the fireplace is filled with abstractions. Like the many, many other beautiful, perfect moments in Mother 3, this scene resonates with people because abstractions work in a powerful, indirect way. Boss battles, experience points, pixel art, chiptunes, silent protagonists; these pieces of artifice lull you into an emotional sense of security. They present to you a world that feels unreal.

But then scenes like the one around the fireplace come around, and you suddenly realize that all of these abstractions represent very real, human truths. Everything is recontextualized, and the moments that just seemed cute and funny before become intensely meaningful. Then the scene passes, the artifice builds itself back up, and you regain your sense of security, only for it to come crashing down yet again. Eventually the credits finally finish rolling and the revitalized logo fades in, and you realize that every single moment in the whole game was part of one person's tremendous, moving, singular vision of the human experience.

It's not a complete picture. It's not even meant to be. It's just one person's attempt to communicate some sort of raw, personal truth that they could feel inside them. And being able to share that truth with someone else − that's transcendence. It's the very purpose of art.
Posted by John Thyer at 10:55 PM 2 comments: