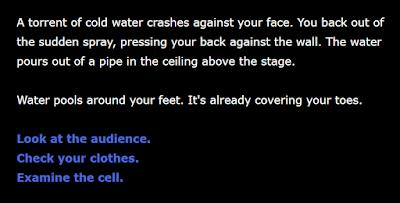 I put out two new games this month! Both are browser games, and you can play them on your computer or on your phone.

The first is a horror twine, Breathless. It takes about ten minutes to play. This one took a pretty long and winding development road for such a quick thing. It started as a very different prose short story right after I put out Wayward last year. I finished the draft but didn't really like how it came together. I tried rewriting it in Twine with a different approach, got some results I liked, then spent four months or so drafting and fiddling with it. Eventually I had something I liked a whole lot! 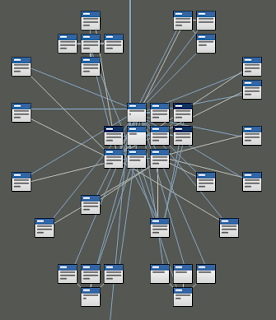 I think the finished game is really neat. I've had like six big false starts with Twine over the last decade. My issue is that I always tried writing in it like linear fiction, without taking advantage of the unique parts of the form. That was true of this project initially -- the intro and ending sequences were originally way more expansive and even more railroaded. But as I worked on expanding the middle part, I realized how much more fun it was when the game felt branching and responsive.

It took a lot of work to get the middle part where I wanted it to be. I even watched playtesters to find obvious choice dead-ends to expand, and figure out which parts needed snappier pacing. (Thanks a bunch Drew, Narf, Cecille, and June!!) It was a hard but really rewarding process; I'm glad I stuck it out! I'm really excited about working with (and playing!) interactive fiction more in the future. 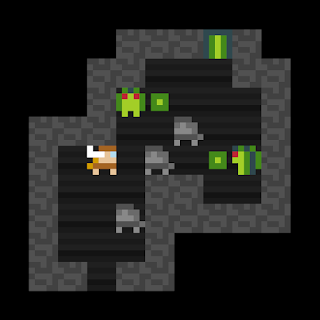 The second is a block-pushing puzzle game called Gorgons' Gaze. It's ten levels long, and seems to take most players over an hour to complete. It's pretty tough!

I put together the engine and aesthetic ages ago, before the pandemic even. I got stuck there because the idea of actually making block puzzles was super-intimidating to me. I made a Sokoban riff in Puzzlescript before (Spider's Hollow, a game I still like a whole lot), but that game is really focused on story. There are maybe two "real" puzzles out of the game's ten screens.

I picked the gorgon prototype back up after releasing Breathless, and after a couple weeks I had a bunch of puzzles I really liked. I'd decided to embrace making a real puzzle game, and I tried to make the later levels as hard as I could without just making them convoluted or overly large. I did a lot of playtesting to make sure there weren't any trivial solutions I missed. (Thanks a ton Thom, Cecille, Drew, and Rhete!!)

The extra work and level drafting paid off -- Gorgons' Gaze has resonated with players to a hilarious degree. It got picked up by a couple rad-looking puzzle game blogs (Bonte Games and a Japanese LiveDoor blog), shared on puzzle game twitter (which I didn't know was a thing), and now it's my second-most viewed game on Itch (after Facets). I'm delighted it's connected with so many folks. I'm excited to make more puzzle-y games in the future!

I feel like the silly seal game last month reenergized me creatively. I'm excited to hammer out more small projects this year. I feel like I'm connecting with a part of my creative spirit I've neglected for a while, and it feels really good.