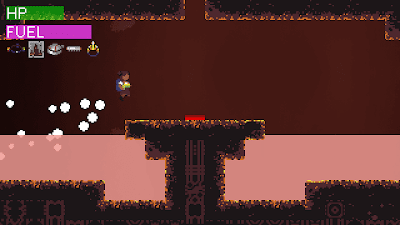 New game! It's called Nymph's Tower. It's a big exploration platformer about ascending a tall tower and finding hidden doodads. You could even call it an INDIE METROIDVANIA if you wanted -- it's the first proper one of those I've worked on!

Reshma and John made the gorgeous art. Muxer composed the haunting lovely score. Toby came up with the game in the first place, programmed all the player movement and boss fights, and did around 2/3rds of the level design. My role was building a lot of the maps in the back half of the game. I'm really pleased with how well our mapping styles meshed together. I think we built a super-cool world to explore!

I had a blast helping make it -- this was my first time contributing to a game in a firmly secondary role like this. I'd love to do more collabs like this in the future. Maybe it's just because I'm lazy, and I enjoyed helping make a big epic game come together without a corresponding big epic amount of work. Maybe it's because I was working with such cool talented people!

It's structured so you can approach certain obstacles in different ways; between that and the lovely expressive movement I think it's got a lot of fun potential as a speed-game. Whether you want to engage with it on those terms or just play through it once, I hope you have a good time!

Two down, one to go!