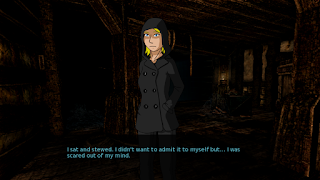 My friend Polly and I released a videogame called Her Lullaby on Valentine's Day, about two weeks ago. It's a horror visual novel where you make choices for the characters and the story reacts to those choices. Our friends Carmichael and Taylor did the art and the music, respectively.

It's the first visual novel Polly and I have ever worked on. It took a little under three months to make. We're both extremely proud of it.

A lot of my creative projects lately have felt a bit labored. I've slowly turned personal creation from something I do into something I stew on and agonize over. In contrast, putting together Her Lullaby's initial draft with Polly felt effortless. There were no creative roadblocks. We wrote to surprise and delight each other, and every new chunk of the story one of us shared energized the other to write the next one.

We had no idea where the story was going when we started. Large parts of it fell into place half-way through, but much of it wasn't planned for at all. And yet the whole thing felt cohesive to us even before we hammered it home with a month of tweaks and editing. I've never written this way before. It feels magical.

Her Lullaby is a raw and personal story, for both of us. It's violent, grating, and a bit melodramatic, because that's what we needed it to be. It mimics many of the stories we love, and it's also something only we could've made. It's the most fun I've ever had making videogames.

You can download Her Lullaby for Windows, Mac, and Linux on my site or on itch.io. You can listen to Taylor's immaculate soundtrack on its own right here.

Posted by John Thyer at 8:06 AM No comments:

The Top 202 Generation Six Games Ever 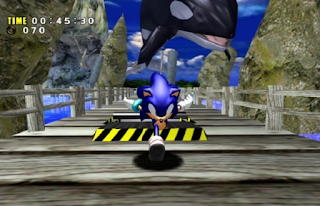 I contributed to another "best of" list as SMPS! This one covers Dreamcast, PlayStation 2, GameCube, and Xbox games, along with PC games released between 2000 to 2005.

You can start the list from the top right here. Polly, Rhete, and I also recorded a podcast giving our thoughts on the top entrants, which you can listen to here.

Posted by John Thyer at 7:17 AM No comments: