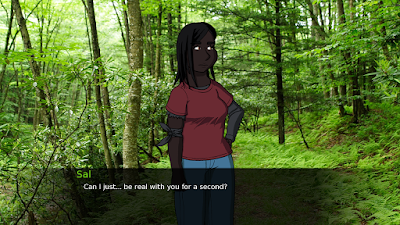 About a month and a half ago, on Valentine's Day, my friend Polly and I released a new visual novel called Afterward. It's the sequel to our previous game Her Lullaby, which we released exactly two years earlier. Like last time, our friends Carmichael and Taylor did the character art and music (respectively).

Afterward is about Sal and Tocco's lives after the events of Her Lullaby. It's about an hour long, and very much not a horror game (which we were coy about with the promo material on release). There are no player-driven choices. There are several important choices for Sal and Tocco.

I've written before that putting together Her Lullaby felt effortless. It was the first large-scale collaborative game I'd worked on, and I was amazed at how smoothly everything seemed to fall into place. It was an hour-and-a-half long branching visual novel with original character art and music, and yet it all came together in less than three months.

Afterward was not effortless. When we started, Polly and I expected to have the whole thing cranked out in a few months. Instead it took a full year of passing drafts back and forth before we had a story we were happy with. This difficulty was because of the nature of the story we wanted to write.

In Her Lullaby, the two main characters are constantly on the brink of murdering each-other. That was the initial idea even, when Polly sent me the first draft of the first scene. It's an abrasive game about a horrible life-or-death situation. I cherish it deeply, because it's a good story, and because I love loud, harsh games.

Afterward, in contrast, is slow, quiet, and confiding. It's about the human messiness of dealing with trauma. Both its journey and its ultimate destination are very different from its predecessor's. The story took a long time to tell because we had to grow into people that could tell it.

I'm very pleased with it. Carmy's new character art for Sal is perfect. Taylor's new original soundtrack is gorgeous, and totally different from her (still-immaculate) Her Lullaby OST. And it's clear evidence Polly and I are growing as storytellers. I'm excited for what's next.