Every year I do a Top 10 List for SocksMakePeopleSexy.net. I'm pretty sure most critics swear off lists after a certain point as a vapid and shallow form of writing, but unfortunately I have yet to reach that level of enlightenment. I love lists, and I was pretty much looking forward to writing this one for the entirety of 2013. I sunk a lot of time into it, so hopefully you'll enjoy the selections and what I have to say about each of them. 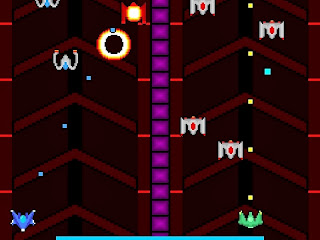 There were a number of arcade-style action games I considered for the number ten spot on this list. Race the Sun is an endless obstacle avoidance game with sharp controls and incredible style. Ridiculous Fishing blends several different styles of gameplay into a seamless, cohesive package. They're both wonderful video games, and I've sunk hours in each of them.

But in the end I went with Super Xalaxer. It has a simple premise: You have two ships, one controlled with the mouse, one with the keyboard. Waves of enemies descend from the top of the screen. If you let enough of them slip by in a short enough span of time, you die and begin the stage over again. (You have infinite continues.) Later on, a couple of other enemy types are introduced, most notably one that takes more shots to kill and fires aimed shots at your ships. Sometimes your ships are split onto two different halves of the screen, sometimes they're both free to roam the whole play area.

What put it on the list is that it's bar-none the most satisfying challenge I experienced in a game this year. What makes it work is its sense of progression. In the beginning, surviving is fairly easy. For a good while it's possible to hold back the enemies just by moving both of your ships back and forth across the screen. But as it progresses, the pace ramps up, and a very small number of new ideas are introduced and developed on. By the half-way point, it starts to get difficult. The climax, in which the player fights off a wave of enemies with one ship and a boss with the other, is downright exhilarating. And if you're up for it, there's a hard mode, and it's even more thrilling.

Another cool thing: because the game is so focused on twitch reflexes and extended endurance tests, it can't be defeated through memorization. It's the polar opposite approach to games like R-Type, which are more focused on variety and texture. Not that there's anything wrong with a memorization-oriented approach (it's how my own games work after all), but it's still a really cool quirk of Super Xalaxer's design.

In a year filled with tremendous advances in puzzle games, strategy games, and games that don't fit into neatly defined categories, Super Xalaxer is a triumph of pure arcade action. It's a game I can see myself running through many more times in the future. 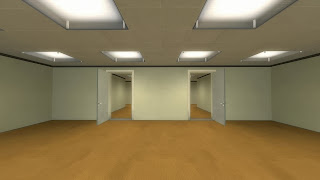 The Stanley Parable is a sort of interactive essay on the relationship between the game designer and the player. It uses comedy to illustrate the absurd lengths designers will often go to to keep players on the One True Path, often ruining the story they're trying to tell in the first place. (Note: this is also the year of Call of Duty: Ghosts, a game that kills any player that dares to linger looking at scenery for more than a dozen seconds.) Interactive storytelling should be a dialogue between the player and the inner workings of the game. Instead, designers are ruining that potential in pursuit of more "cinematic" storytelling.

In The Stanley Parable, what would normally be a failure state that sends you back to a checkpoint is instead an equally valid path through the story. This is a much more interesting use of the capabilities of interactive storytelling, and tons of other games have used failure states to fascinating narrative ends. Imagine if you screwed up rescuing Lucca's mom in Chrono Trigger and it just booted you back to a checkpoint a minute earlier. Imagine how different Demon's Souls and Dark Souls would be if they treated death like a conventional video game. This is the sort of storytelling that The Stanley Parable celebrates − through example no less. I've made two games, Fugitive and Into the Vortex, that do unconventional things with failure states, and I can definitely say that The Stanley Parable influenced the way I think about storytelling in video games.

And it really is just hilarious. The writing is razor-sharp; it's the only game I've ever seen that manages to include a genuinely funny (and thematically appropriate!) Portal reference. The fact that it actually has something to say on top of that is icing on the cake. It's a shame that everyone seems to think talking about the game will somehow ruin it (it's not a game that can really be spoiled), because there's a lot of fascinating material in here that deserves to be talked about.


You can read the rest over here at SMPS. Check out the other lists too while you're at it!
Posted by John Thyer at 10:12 AM No comments: