Atop the Witch's Tower 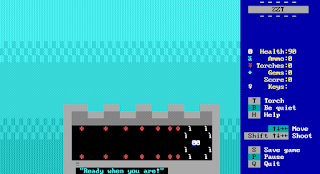 New game! It's called Atop the Witch's Tower. You can play it for free on my site, either by downloading it or playing it in-browser (thanks to Archive.org).

I put it together intermittently over the last six or so months. It's a love story, like a lot of my games. It started as a quick experiment while I learned my way around the ZZT engine, and then grew into something more intimate and personal. It still shouldn't take more than 15 to 20 minutes to play. I'm very pleased with how it turned out, so I hope you give it a look!

ZZT itself is a 1991 DOS game by Tim Sweeny with an extremely robust world editor. There's a rich history to the game and the community that developed around it, one I'm mostly familiar with through Anna Anthropy's excellent book on the game. I think it's all fascinating, and I'm glad to have made myself a part of that history in a small way.

Posted by John Thyer at 2:39 PM No comments: