Irons in the Fire #2: Observations on Scope Creep

Let's do another projects update! The last one was pretty fun. It's like I'm making new content without actually having to release anything!

Over the last month or so I've had a number of nice creative epiphanies regarding my ongoing projects. All three of them were getting a little intimidating to me -- I was struggling to actually visualize the path to finishing any of them.

Scope creep is something every hobbyist artist deals with I think. You get an idea and you start fleshing it out in your head, maybe you even start making something. But in the process of making the thing in your brain, it turns out to be more work than you thought it would. And while a lot of that work is fun and energizing, a lot of it doesn't spark the same kind of creative satisfaction.

I think the way forward for me as a hobbyist creator is to scope the project around maximizing the work that's FUN for me... and minimizing the work that isn't. Because when I really critically think about the stories I want to tell, a lot of the not-fun parts I'm dreading aren't actually necessary at all.

I've cut lots of not-fun-to-make game chunks from my outlines in the past. I've never once regretted it. Mostly this manifests as thinking I need to do an elaborate intro or ending cutscene for a game and then 98% through dev realizing I don't need or want one. Quarantine, Fugitive, Frog Adventure, and Kikai specifically all had plans for big cutscene beats that ultimately just weren't necessary for those stories.

Her Lullaby, Atop the Witch's Tower, Facets, and Expanse all came together pretty easily because nearly every part of each game that I worked on was creatively exciting to me. The stories were all important to me, but the medium I was working in was cool too! I'd never seriously played around with Ren'Py/VN language, ZZT, RPGMaker battles, or traditional arcade shmup structures before. I was constantly making joyous formal discoveries making these games, and their stories evolved to accommodate and incorporate those discoveries. 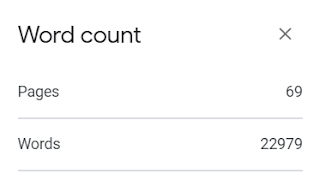 I have a finished first draft of this, which feels wild and rad since it's the biggest prose thing I've ever worked on. I'm editing chapters now and feeding 'em to a couple test readers as I go, and it's been super-fun and fulfilling. I like working with words and I've done very little fiction writing the last few years. The whole project's gotten a bunch of long-neglected synapses firing off for the first time in a while, it's really nice.

The epiphany moment with this one was realizing I wasn't really excited about any of the VN-specific language stuff -- in six months I didn't put a single word from my big draft into Ren'Py. It was all still sitting in a google doc. Even after getting a cool Higurashi-style presentation template from Polly, and a couple pieces of gorgeous test art from two good friends I really wanna work with on something in the future.

I got a friend to test-read the first chapter. He liked it! It was the first time anyone had looked at the story, so it felt really good to get some validation. And that's when I thought "boy it'd be nice to have this done in the next couple months instead of, MAYBE, sometime late this year."

So instead of a videogame... I'm just making a little book instead! I think I just felt insecure about the idea of putting out something that was JUST my words. I thought fewer friends would care if I put out a book than a videogame. That's probably true, but who cares! I thought my writing wouldn't be strong enough to stand on its own without music and art. That could be true too. And who cares! If I care enough to finish it and make it as strong a story as I can, whether or not I'm an "objectively skilled" writer yet, someone else on the planet will probably get something meaningful out of it.

It was gonna be a kinetic VN with no choices already, so making it just a book doesn't really change the story at all. But Afterward was also a kinetic VN -- that game did a ton of stuff with the presentation that excited me and helped the story. That there were no VN language tricks at all in my head that felt essential to this story is maybe another sign letting go of the medium altogether was the right call. Maybe sometimes words are enough.

The story's a prequel to my game Facets. It's about how Lacy and Alyssa (two important characters from that game) first met. It's gonna be sad and scary and cathartic and gay. It's a lot like Facets, but I think the fundamental vibe and ethos are a bit different, since I'm pretty different from the person I was when I made Facets.

It's a little weird to write a non-interactive prequel to what is by far my hardest game. I'm looking into ways to make the story of Facets approachable to more of my friends. I think I want to do a v1.1 release that fixes a couple bugs, adds an ATB wait option, and maaaaaaaaybe adds an Easy Mode. There's still a part of me that doesn't like the idea of a difficulty select for this specific story, just on a visceral aesthetic level, but since the game's been out for three years I feel like I can afford to be less precious about it.

If that all works out, I'll release the v1.1 version and the book at the same time. Facets' three year anniversary date is coming up soon, I'll shoot to have everything done by then.

I can't guarantee you'll like the book. All I can promise is that I'm bringing the same level of care and love to it I've brought to my game projects. If that sounds exciting to you, maybe give it a read when I'm done! 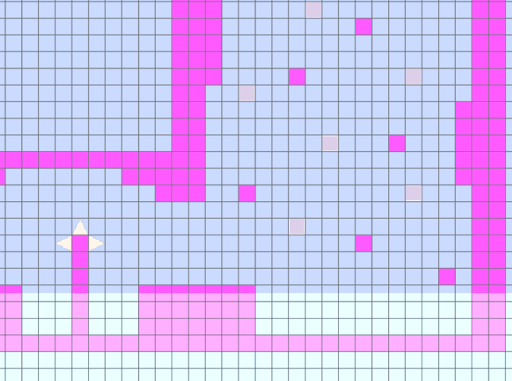 Y'all I just love making big videogame maps so much. I like arranging thousands of tiles on a big dumb grid and seeing a world come into existence in front of me. And it's different from just drawing a pretty picture -- tiles on a game map are imbued with formal meaning by the player character's verbset. So seeing a bunch of carefully placed tiles, and knowing they were all put there to interact with a player's play and psychology in a certain way, and knowing -I- put them there... it's just heaven.

I've made some FAT GORGEOUS maps for this game.

The epiphany part of this was realizing how terrified I was of all the unfamiliar tech in this game. It's made in LOVE, and all the actual engine coding is in Lua. I think if I was in a better headspace I would've had fun digging around the engine and learning all the code stuff, but unfortunately I started work on it only a few months after having covid for six weeks when my brain was pure mush.

So I finally realized I could just ask for Toby's help on all the hard tech stuff! I'm done with my part for the time being -- once I stopped being terrified of all the complicated stuff I thought I'd have to do later on, it was a lot easier to finish my maps. I'm real excited to help tie the full thing together when the time comes.

Give Toby's games a play over here!! They've released a ton of good games already, and they're also currently wrapping up a big mega-project they've been working on for literal years and it's gonna rule. And then sometime after that you'll get to play this cool metroid-y game I helped out on! Now's as good a time as ever to jump into their backlog of rad work!! 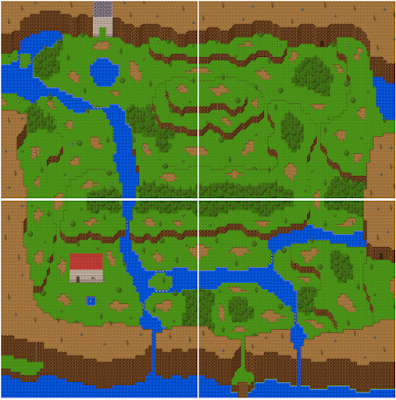 I was ready to let this one go. I still might be honestly.

It was just such a massive vision. One big island, made up of six by six maps, each of which was sixty by sixty tiles. AND a bunch of turn-based combat design and character progression. AND five dungeons. AND a pretty in-depth story.

If I return to this one, I'm slashing it down aggressively. I don't want ATB fighting, I don't want dungeons, I don't want a big portentous narrative. The maps are the part I'm excited about, so I want to refocus the project around them. I still like a lot of my ideas for the story and fighting, but they'll work just as well as part of a concise dedicated dungeon crawl game down the line, if I feel so inclined. Better to focus on what's exciting me Right Now and actually finish the project then get lost in the weeds tying a bunch of disparate ideas together.

I still feel like I need some kind of fighting and character progression, because I want there to be resistance/structure to exploring the maps. Blocking specific pathways with hard monster fights and making the player accrue resources to beat them is one organic way of shaping a top-down world like this. Since I'm not interested in adventure game puzzles for this story, it's the approach that makes the most sense to me.

Honestly I've thought from the beginning "I wish this was like Ys or Hydlide". Those games had the balance of simplicity and resistance I'm basically after. But I didn't think I could program that in RPGMaker, and I certainly didn't think I could code action game bosses that were suitably ostentatious to match the Epic Story I had in mind.

But if I didn't care about having an epic story, if I let it just be a light silly game, maybe a streamlined combat system was an idea worth revisiting. And while making an Ys or a Hydlide in RPGMaker still seems beyond me, I could actually picture the (VERY cute) system from For The Frog The Bell Tolls working nicely with RPGMaker events.

Three hours of fiddling later, I had this. It feels good and right. I'm pleased with it. I might be excited to work on this project again, maybe. 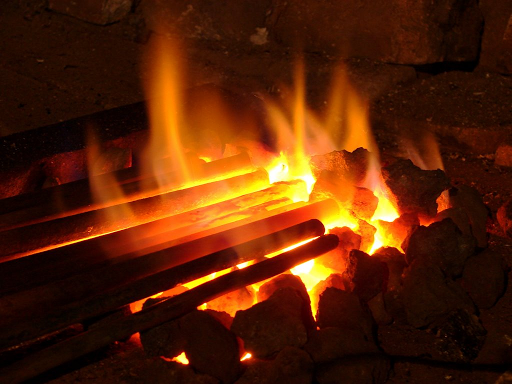 I'm like most people on earth in that I'm stretched pretty thin most of the time. I work a full-time job, I have people I'm close to I like spending time with, I have other interests I dedicate a lot of myself to. If I want to be a creative person, I need to find ways of being creative that fit in around everything else going on in my life.

That means I can't force myself to work on projects I'm not enjoying, because I over-scoped, because the fun parts of creation are out-weighed by the not-fun parts. When I say "I can't" I mean it literally -- my body will not let me work on art if I'm not enjoying it. I don't have enough energy for that. So instead I spend months dreading the stuff I "have" to do sometime in the future, and I let that dread poison the rest of the creative process.

Maybe this is a naïve way of telling stories. Maybe continuing to chip away at projects even when they aren't satisfying to work on is the mark of a real, disciplined artist, and I'm revealing myself to be a hobbyist pretender. If so, fine. At least I'm having fun again.
Posted by John Thyer at 4:44 PM